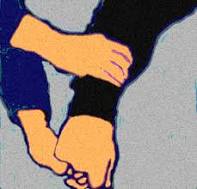 ‘In the case of baby Fiona, David ‘You are NOT the father’.  David’s ex-girlfriend Liliana dramatically gets up from her chair, holds her chest as if about to go into panic attack mode. Howls so damn loud as if she is in labor goes near the screen and points at the nose of baby Fiona, runs to David and touches his in shock and disbelief saying, ‘Look at their nose’s, their nostrils are the same size, big enough to fit a penny inside.’

The DNA evidence is in, they are WILL NEVER BE family.Poor Liliana, she brought David, in hopes he would turn out to be Fiona’s daddy and what’s more they would get back together.

Maury’s show might not be on your radar for obvious reasons. But the people featured on there are real, and are dealing with drama albeit, Nollywood style.  Ever watched a Nigerian movie? Lawwwd have mercy, the best actors come from Naija! What?! (*Lil John’s annoying voice*).

Choose your relationships carefully. Love is not enough. It should be, but we live in dangerous times. There are other factors to be put into consideration.   If you happen to fall in love with somebody whose ex is very much in the picture in the name of they have kids together, RED FLAG.  Maintaining a healthy co-parenting relationship is one thing, but when he/she is always calling the house, demanding audience unnecessarily, it’s time YOU took action.

Most of these obsessive ex’s, could land lucrative jobs as secret agents, if only they put their stalking skills to good use. They are damn good. They show up in unexpected places. For instance:  You are in church, looking like the ‘IT’ couple with the new man, when MR. EX comes strolling in and sits next to  you. Your current man listens keenly to the word, completely unaware of the fact that the devil is in the building.  What is he doing here in the house of the Lord?

In conclusion, watch out for red flags before jumping into a relationship!