Why is it that some concern themselves about others’ weight? Why should it be an issue if someone is skinny, or packing a few pounds? It shouldn’t, it’s their own body. In my opinion, if you are comfortable and healthy in your skin, then don’t listen to what other people say, or even go over the top with dieting or other drastic weight loss measures.

I’ve often wondered why some young girls and mature women would hurt themselves to look like a model or celebrity in a magazine, or whatever other stuff contributed to their insecurities with their bodies. I definitely think the entertainment industry plays a part in that; have you seen the size of some models or entertainers in the spotlight? I mean lately they’ve been trying to incorporate the statement “real women have curves” into the media, but has it really been working, and are they really serious about it? Many young girls look up to these thin models and dream about becoming them in every way. Where are the magazines that encourage these girls by doing articles on self-acceptance or “you’re beautiful just the way you are?” or is it that they won’t make money by writing about such things? 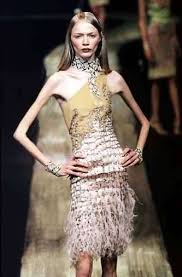 People have always been scrutinized for their specific weight class. Jessica Simpson is an example of such ridicule in the entertainment industry; when she lost weight, they complained she was too skinny, now that she’s gained, Jessica became the topic of many fat jokes. Other celebs have been attacked by the media as well about their weight: Hilary Duff (was called “Duff Puff”), Jennifer Love Hewitt, Park Bom (2NE1), Tyra Banks, and many more. So who wins? no one of course, because you can’t make everyone happy. Just take care of yourself and try to stay healthy, that is the most important thing.

What do you guys think about this?

One thought on “Too Fat, Too Skinny! What’s wrong with this world?”