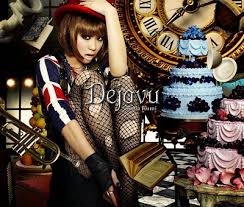 “Sexy” Jpop and nail art queen Koda Kumi will be releasing her 9th studio album “Dejavu“, on March 2, 2011. The new album will be sold in two versions, limited and regular. The limited version is the audio CD and two DVDs, with her latest music videos and live performances. The regular on the other hand, you guessed it, is just the audio CD consisting of 15 songs including her latest releases “Pop Diva“, “Lollipop“, and “Suki de x3“. If you’re like me and would love to get your hands on the limited edition, make a pre-order now at cdjapan or yesasia.

Kumi has recently released a teaser of three music videos to be included on the limited edition. Watch the videos below :