When people heard the name Thompson Square, a question that immediately started floating around was “where could such a place be found?” Well, set your minds at ease if you haven’t made the full discovery as yet; the name is actually derived from married couple Keifer and Shawna Thompson’s fantasy land, where beautiful music is created.

The newest faces to what critics are calling Country meets Rock, has been making waves with their latest single ‘Are You Gonna Kiss Me or Not‘. I’m always up for checking out new music as long as it’s good, and Thompson Square’s music is definitely new and good. Their self-titled debut album will be released on February 8th, but since I’ve already taken a listen to the entire record, I’ll just go ahead and give my review without giving too much away:

1. ‘My Kind of Crazy‘ is my kind of song: The album starts off with this upbeat track about either going the extra mile for the one you love, getting into arguments, breaking up to making up, and of course keeping the flame alive. Quite the fun song with lovely lyrics indeed. The duo’s vocals harmonize well with each other, but when it comes down to raising the level, Shawna pulls it off superbly.

2. ‘As Bad As It Gets‘: The message in the previous track continues in this one. It’s all about the daily crazy stuff that goes on in the relationship, and how they feel about each other despite all of that. No matter what it is, the love is still there. I love the lines “we ain’t killed each other yet, I guess we got it good, if that’s as bad as it gets”. Any song with such lyrics is worth a listen.

3. ‘Are You Gonna Kiss Me or Not‘: My absolute favorite. This song is so to the point. If you’re feeling each other in the relationship, why wait? hurry up and make the move. The lyrics pull you in because its definitely something you can relate to; from the first date, to being in a serious relationship, to even getting married. It’s a true couples anthem. Beautiful song.

4. ‘I Don’t Wanna Miss You‘: oh the ache and loneliness you feel when the one you love is not beside you. The song details it well, it’s hard to move on when you’ve lost the one you truly loved, or if you’ve been separated for a while. A sad love song. I like the guitar breaks in this track too.

5. ‘Getaway Car‘: Living on the wild side. The duo sings about being adventurous, or somewhat mischievous but having someone there to hold you down. A fun track to rock out to.  I particularly like how they make mention of wild people like Jesse James and Bonnie & Clyde. We all know how their stories went.

6. ‘Let’s Fight‘: Their first single. The emphasizes on the fact that a relationship doesn’t always have to be perfect. It’s healthy to argue and have disagreements about things and still make up after. The song is all about not making the relationship too predictable, but adding fights here and now to strengthen the love. Fighting is apart of communicating, and couples need to express their true feelings about things going on in the relationship.

7. ‘Glass‘: Moving on with a new love is not always easy when you’ve been hurt before, so it’s important to take things slow. It gets tougher if you’ve both been heartbroken, but you can both start over together and find love again.

8. ‘I Got You‘: We have each other throughout it all. You can rely on the one you love to help you stay strong in times of need. I beginning to see the going trend on their album, if the previous songs didn’t give it away, then this track sure did.

9. ‘Who Loves You More‘: Nothing seems to go right for you, but you can rest assure that when you get home, there’s someone waiting there to give you all the love in the world. I like this song because it reminds us there’s no place like home.

10. ‘One of Those Days‘: Who can say they’ve never been irritated when every single thing’s going wrong? You make all these great plans but none seem to go through. It’s like having the worst luck ever; but it will definitely pass, and you’ll be saying later on that it was just one of those days.

11. ‘All The Way‘: If you both love each other then trust in each other. When there’s love, you can take the relationship all the way by committing completely to your special someone. A true message is depicted within the lyrics of this song. Love all the way without going back.

12. ‘Keeping Up with the Jones‘: Tough times in the relationship. The duo sings about bad habits that causes a strain on the one you’re with. Having them constantly picking you up after every fall, and sticking through it because of love. Shawna takes the lead on this heartrenching ballad. I love the line “it ain’t a bed of roses keeping up with the Joneses.”

13. ‘Brilliant Disguise‘: Wanting to know the genuine part of the person you’re in love with. The song paints the picture of someone putting on a show to impress the one they’re currently in a relationship with. Trying so hard to impress but not trusting the one you love enough to accept the person you truly are.

Overall, the duo’s first album has a “couples” concept, which is acceptable being that they’re a couple themselves. I really like this album and highly recommend country music fans to get it, or even if you’re not a fan of country but is looking for something fresh, still check them out. “Thompson Square” gets a rating of 4.8/5

Purchase their album on iTunes

For more details about Thompson Square, visit their official sites:

One thought on “[Review] “Thompson Square”” 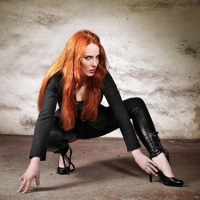