Check out the highlights from day 5 of New York's Fashion Week. While many stars were feeling the Grammy fever, others chose to be in attendance at high fashion houses runway shows. See the pics below: 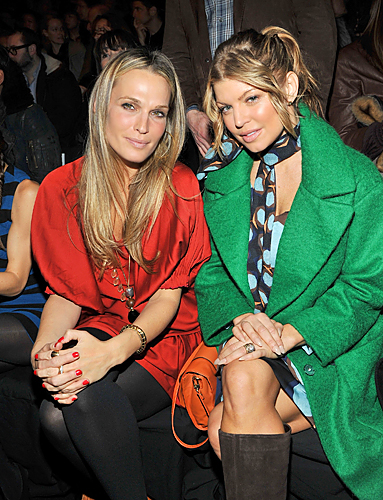 Fergie was in New York to check out Diane von Furstenberg’s latest collection, where she was seated next to Molly Sims in the front row.

Diane Von Furstenberg drew from her Studio 54 days when she created these floor-length microsequined stunners.

Tory Burch's collection was inspired by the idea of the English countryside. “It’s the whole idea of being outside, mixed in with some American sportswear and femininity."

Shantel VanSanten, Rose McGowan, Brittany Snow and Lynn Collins all showed their support for designer Lela Rose, not only by filling the front row of her Fall 2011 show, but also by wearing dresses by the label.

Lela Rose revealed her favorite look from her fall collection backstage before the show, and it’s this one seen here—“an ombre feather piece that's all been dip-dyed, and the shoulder is kind of veiled.”

Emma Roberts looked simply chic at the Jenny Packham show dressed in wide-leg trousers and a feminine floral blouse by the designer.

A poster backstage showed various pictures of hair to serve as inspiration for the Preen by Thornton Bregazzi show along with words "Boyish Barber Shop" and specific instructions. Hairstylist Luke Hersheson converted the inspiration into reality.

Thakoon and Max Azria both sent down models donning choker necklaces at their Fall 2011 shows. The Thakoon approach was wrapped in velvet, while Max Azria imagined the close-to-the-neck accessory in charcoal and brown leather.