New York's Fashion Week is nearing its end but stars are still turning up in full force to support their favorite designers. Check out the highlights of day 7 below: 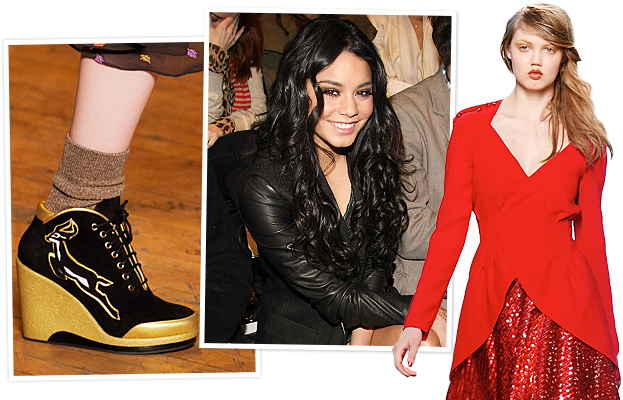 the Rodarte show attracted more than a few celebrities this season, including Kirsten Dunst, Sofia Coppola and Kanye West.

favorite looks from the Rodarte collection

Derek Lam wasn't just busy with his own label this season. He also collaborated with the live auction website eBay to create a unique viewer's choice line.

Michael Douglas and Catherine Zeta-Jones joined the anniversary celebration by sitting front row at the Michael Kors show, both dressed head-to-toe in the designer.

Marc Jacobs used a stampede of stags for his Marc by Marc Jacobs line, as the animal appeared on printed bags, dresses, and even emblazoned on this pair of wedges.

MAC makeup artist Val Garland—the same woman who designed Lady Gaga’s “Born This Way” look—said the beauty look she created for Sophie Theallet's fashion show was a "modern take of Faye Dunaway in Bonnie and Clyde." That meant three jewel-toned versions of a smoky eye (burgundy, navy and emerald) along with a barely-there lip.