Long has it been since I’ve sat down and watched a scary movie and actually got spooked. And being that I’ve yet to write a full review on some film of interest, I decided to take on “Insidious“. The James Wan horror is based on a family fighting to protect their child from being consumed by evil and taken into the realms of ‘the further’, all while he’s lying in a coma. I must admit that at first I declined the thought of watching this film after discovering that it was made by the same team behind “Paranormal Activity” and “SAW“, both of which I utterly despise. However, after watching “Insidious“, I found it to be quite interesting. It might not be the most horrific or terrifying of horror movies, but you’ll be somewhat moved by the family’s efforts in trying to save themselves.

The movie starts out with the Lambert family settling into their new home. A huge but creepy old house with signs of “I’m haunted” written all over it. The director wasted no time in getting to the point, and strange things begin to happen here and there. Mom and dad are dumbstruck after discovering that one of their sons, Dalton, after falling from a ladder in the attic went into a coma. After several tests, both doctor and parents are left without any logical explanation after seeing that there’s no injury to the brain which could cause a coma. 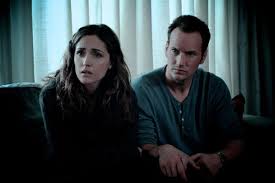 Mom starts feeling uneasy by herself at home and soon mysterious things start happening around her. Dad buries himself in work and stays out late at the office, while mom is convinced something strange is going on inside their new home. They slowly (dad’s the last to believe) but surely begin to realize that Dalton’s coma is not the only thing they should be worrying about. After hearing all the creepy voices, seeing shadow movements in the dark, and of course having their baby being tormented brought the Lamberts to the astonishing conclusion that their home is haunted. The family brings in a psychic which only provides more evidence to support their theory, however they are told that Dalton is in fact not in a coma, and it’s him who’s being haunted. The Lamberts soon realize that their strength as a family and the love they have for each other will help them win the spiritual battle against the forces of “The Further“, and save Dalton from the possession of evil.

Overall, “Insidious” was a good movie. May not have the blood, or the yucky stuff, but it was kind of scary in its own way and definitely way more frightening that it’s predecessors “Paranormal Activity” and “SAW“. In my opinion, I give this movie a rating of 3.5 out of 5. Check out the clip below: