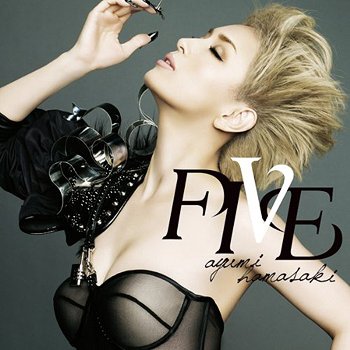 Ayumi Hamasaki never did make a fan out of me, and the main reason for that is because she never got me interested enough to listen to her records. Sure, now and then I’ll come across a music video or single that’s intriguing but that’s where it ended. I admired her beauty and style, but disregarded her talent and why she was so successful to begin with.  In fact, Ayumi is one of the most successful and popular female Jpop artist of our time; trust me I did my research. Her sound is described as ever changing, and that’s no surprise when she has complete control over her creative decisions, allowing her to experiment and mature as an artist. She never had a failed release, and like all its predecessors, “Five” has topped music charts in her homeland.

“Five” is probably the one record that’ll lead me into checking out Hamasaki’s music more. The EP captures every essence of her art; there’s a mixture of balladry and soft rock while balancing her strongest influence, pop. Saying that she isn’t a wonderful singer is just an insult when she obviously is; therefore, I’d rather not go into the details of how great of a musician she truly is and how soothing her voice sounds. Instead, I’ll focus more on the songs and what makes them sparkle like stars or fade into the dark.

The opening track, “Progress”, has a soft, mystical piano melody in the intro that attracts the ears right off and creates an addiction you’re unable to recover from. You begin to think the album starts with a slow paced song; however, the track builds up energy and intensifies by the second verse. The track’s about moving forward and reaching your highest goal set. We all need to overcome trials and do our best in achieving the best that life has to offer. The key point of the song is how well the music is arranged. The instruments create a dramatic combination that’s definitely fitting as a theme song for the PS3 game Tales of Xillia. The music video demonstrates my interpretation further. See the clip below:

“ANother song” gives listeners an idea of how sensual a pop melody sounds when blended with orchestral strings that resonate in the atmosphere when played aloud. The song features the sultry vocals of AAA’s Urata Naoya (former dancer), who previously invited the singer on his solo single “Dream On.” I guess he owes her one. Anyway, back to the topic at hand. “ANother song” is a lovely song but it doesn’t have that wow factor I’m yearning for on the record. And the music video faded into the dark without any hesitation.

I’ve finally found my favorite track on the album. “Why…” signifies everything I love about soft rock songs that holds a deep meaning. There’s a certain element of surprise that draws my attention both mentally and emotionally. It’s inescapable, though I have not the intention of getting away from it. That’s exactly the kind of feeling I get from the song and I can’t find the words to explain it any further. JUNO lends some melting vocals to the track, uniting with Hamasaki’s sensuality that’s already flowing in and out.

The music video dives into a fantasy world where Ayumi explores the unrealistic and tries to find some sort of balance in order to cope.

“Beloved” is the strongest ballad on the album. It soars in the sky, riding on a cloud filled with love. This is both emotional and passionate, and emphasizes on the singer’s ability to convey intimacy in music. She’s notable for these kinds of songs but I’ve yet to feel the extent of how skillful she is at her art. The song’s about the intense feelings you have for someone you love, whether they’re by your side or away from you. I feel an explanation is not required when you can tell how it is by just looking on Ayumi’s face and actions performed by her body in the video:

Note: “Brillante” refers to a list of musical terms. I assume she utilizes this name for the track because of all the different scores and harmonies used, resulting with a beautiful masterpiece.  I like the Middle Eastern feel to the song and how electrifying the vocals are. It sounds as if it came straight from the opera house.

The music video is also quite interesting; the singer is portrayed as an Egyptian temptress parading around in a room full of men.  It seems her position is to invigorate these wolves.

In all honesty, I was a bit weary by the end of the album, even though it was only five songs. “Five” is alright but the songs weren’t exactly banging. I was expecting more than what I’ve received from Ayu on this one and I can’t say that I’m loving the record entirely. However, it can be tolerated. “Five” gets a rating of 4.4/5

(Purchase this album now on cdjapan)