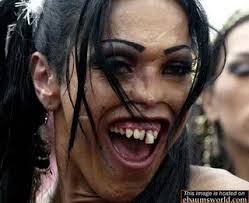 On Monday, I came across the most thugged out lovers I’ve ever seen in the entire history of bus chronicles existence.

Dude was short about 5’4′ with a big beer belly that stretched from here to the ends of infinity. He had gothic tattoos, with snakes and little devils dancing around on both sleeves of his arms that had me at WTF.  As if in competition with his madam of who had the most fucked up look, she was at the bus stop spotting a a pajama and onesie crossbreed in broad daylight.

Pause! A moment of silence to lady thugger’s look! I friggin love onesies but, they are not for public consumption.

Coupled with the fact  she was high as a kite on something that was definitely not oxygen, seemed like some white crushed substance had been inhaled one too many a time. The fire men who were posted directly across from us at the firstation ended up being her crack muse.  From time to time, she would randomly yell out.

You guys are the greatest, you do the shit I wouldn’t do. Scale walls and save lives just like batman….I wouldn’t do that, not even if they paid me a million bucks!

Her beer belly boyfriend fervently tried shutting her up to no avail. Through the divine intervention of ingenuinity on his part, he was finally able to get her composed for a good five minutes. This was accomplished by launching into a personal tirade about how he would sue the balls of the company that laid him off. They didn’t know who they were messing with!

I will show them not to mess with little people no more!

From the conversation that ensued for the five minutes she was quiet, I knew he was just blowing steam. The company’s lawyers were giving him grief, as his lady had enough of his boo hoo, woe is unto me story.This declaration set the imaginary goons that had held her mouth shut free from their captivity, because she went iiiiiiiiiiiiiiiiiin on him, albeit lovingly so.

Oh just suck it up! You’re a big boy, aren’t ya (rubbing his beer belly for effect) You ain’t going to do jack shit. You don’t have the kind of money they do.

He was so embarrassed because his gangsta had been utterly been devalued in front of total strangers. He shook her so hard almost causing an earthquake to erupt in her mouth that would knock the remaining couple of teeth that were generally spread across her mouth. Ladies, if your man is a G please educate yourself and learn the codes of being a G’s girls. Rule #1, never ever forever ever expose your man’s weakness for all and sundry to hear. It is for him to know and yours to never reveal not even to best girlfriend.

Thugs with no money to talk of are not considered hard. They soft. It shows they are not hustling right. Now, when we got on the bus the PDA that ensued had me at ewwwwww and weren’t ya’ll just fighting. Guess the white stuff had them on level high, not on this earth.

Shortly after, a friend of theirs got on the bus and it was crack party + missing teeth central.  They reminsiced of the good times passed when money wasn’t a thing and they could afford to live in hostels-note not houses-hostels. This dude who seemed to be the age of Methuselah in the Bible, had a  thing for miss thang!  He kept commenting on how her beer belly boyfriend had stolen the one he loved during all the years gone by, and how she looked foiiiiiiine like the day he met her.

At this point, I was in a complete state of shock and despair because miss thang was not the business.

It is hard to believe anything a crackhead has to say, but there seemed to be some sort of real pent up emot ions coming from Methuselah! Aiiiiyi….Thugs got emotions too. Never knew that, until I saw Jim Jones crying in Love and Hip Hop that has his girlfriend busting everybody upside down the head for being too close to Jimmy.  Seven years later she is proposing and he is rejecting her saying he is not ready blazah blazah blazah. Ladies, let’s do better! Stop expending your energies and making a career out of being a girlfriend. It ain’t cute and it doesn’t earn his respect. It is important that you show him Yes you can like Obama  be his Michelle and still hold down the fort!

Before I knew it, it was time to hop off .