My initial impression of The Saturdays was a group that delivered soulful, soft rock, sensual pop music. I had no idea they’d be a modern day electropop, dance act. Anyways, fast forward to the present and you’ll learn of their ten top 10 singles and an ever growing international fan base of devoted fans. Indeed it’s fair to say they’ve achieved moderate success since their debut in 2008 with “If This Is Love.” However, my only memory of this group is 2010’s “Missing You.” And now, putting all those accomplishments in their homeland aside, has The Saturdays managed to deliver a solid return with their 3rd studio album “On Your Radar” and possibly get the attention of the rest of the world? Only a review will tell.

While the lyrics did nothing for me due to the repetition of each line, I did like the catchy chorus. The opening number confirmed that the group stayed true to their club style for this album, and though I’ve never been a fan of their dance tracks I can tolerate this one for its mesmeric sound effects and energetic beat. Evidently, this did get me “All Fired Up,” not too sure what’s going on in the video though. The water effects and dark contrast emphasized the sexiness but would have liked to see the ladies doing more, in terms of choreography.

There’s something very robotic about “Notorious” main beat that I found to be either annoying or simply unique. If you take that out of the way you can actually enjoy listening to this song. The track is considerably entertaining and I particularly like the harmonies during the chorus. The lyrics are meant to be playful like your typical mainstream electro pop. It’s hard to despise and I would chose this over the previous any day.

“Faster,” in my opinion, has the most sensible lyrics so far. The verses sound sweet and passionate; the melodies are delivered. However, the track worked remarkably well without the chorus, which I found to be a slight interruption. The song’s about reminiscing on the start of the relationship and how reluctant the girl was before finally giving in.

The next song carries even sweeter and more emotional words that the previous track. “My Heart Takes Over” is my favorite song by the group since “Missing You.” Both songs managed to reach the core of my soul like no other. Reason being, the girls sing with such a passion that’s more believable than any of their dance numbers. “My Heart Takes Over” demonstrates their clear vocal capacity without the antics that’s infused in their dance numbers. It’s a treat to hear them singing songs like these now and then because it’s much more subtle and toned down. They’re simply singing effortlessly.

“Get Ready, Get Set” was distasteful from the moment it started right till the end. It was almost like a fight trying to get through this track. The song’s completely soporific; the beat sounds all over the place and the vocal arrangement sounded like a high school cheer. Excruciating is not even the word for this mess.  What a downer after coming from such a lovely place.

The addition of Travie McCoy wasn’t enough to save “The Way You Watch Me.” I must admit the edginess in the urban pop influenced number was kind of interesting, but I was left flabbergasted of how unappealing the track turned out to be when it had the potential to be better. 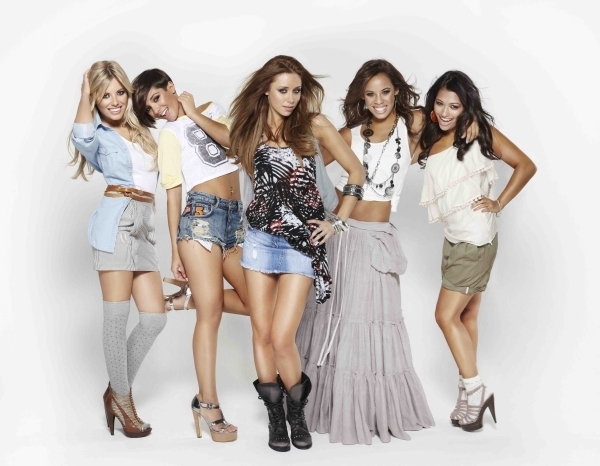 Thankfully “For Myself” picked things back up. I like the mixture of r&b and electro pop on this one. The transition into a faster dance beat towards the chorus wasn’t drastic and I wasn’t overwhelmed by the sound arrangement at all. It’s really not bad and I hope the album continues to pull me in from here on out.

And it certainly did. “Do What You Want With Me” grabbed my attention immediately. I love how sexy and intense their vocals are on this one. I injected the song into my heart until the beat started racing for the finish line. The sudden change wasn’t exactly tasteful and in some ways lost the sensuality depicted earlier but that didn’t overshadow my first impression and I still like the song regardless.

I’m beginning to detest the brainiacs who had the bright idea of keeping the club fillers coming, ‘cause that’s just what they are, fillers. “Promise Me” sounds like a mistake; like it was never supposed to be on any album but the space needed to fill up regardless of the crap that would be used. The best part of this song is the dubstep break that lasted around 20 seconds. Before and after that little effect, I just can’t remember anything else significant about this track.

I love “Wish I Didn’t Know” and I appreciate it so much for coming when it did because I was just about ready to call this album review a wrap. It’s a great move back into the bittersweet pop ballads. The acoustic guitar was a pleasant addition. The voices are lovely together, dramatizing the sorrowful story being told in the lyrics. My interest is definitely recaptured. I’m contented to continue listening to the rest of the album.

“White Lies” isn’t loveable but I don’t hate it either. The words are substantial and entail a deep meaning, but the beat buries that depth. The song would have sounded better had it been mellower and not so over the top. It’s not a track I would listen to again after today. That’s sad but I’m only being realistic.

I’m enchanted by the dramatic piano melody in “Last Call.” The harmonies are astonishingly beautiful and without a doubt you’re made a believer that these ladies can truly perform soul numbers impressively well. Why can’t they record more tracks like these that send chills down my spine? This is just breathtaking.

“I Say OK’s” beat sounds like a remastered version of “Notorious” but strangely I don’t mind at this point. The song’s actually catchy and while I became somewhat suffocated by all the club numbers, the few ballads made up for my boredom.

“Move On U” ends the album in a dance vibe. In my opinion, this is the worse one yet. I cringed my fist to make it to the end. I just didn’t warm up to this at all, even after trying to attempt at a second listen.  I’ve heard better but in a way I don’t want to hear more. I’m overjoyed that it’s finally over.

I’ve always done reviews based on my honest opinion leaving no room for bias, and after listening to this album in its entirety I can honestly say that I wasn’t impressed. I did have a few expectations upon seeing the official cover of the girls’ portrayal of half nakedness in a tasteful way. In fact, I made the assumption that the songs would be as appealing as the ladies but unfortunately I’m left with overproduced, forgettable, lyrical joke, and full on generic material. There are four exceptions I can count aside, but it’s not enough to make up for a lack of maturity in sound. This release isn’t too far from their previous albums, and that’s actually not a good thing when you’re looking for change and artistic growth. Sorry ladies, but I don’t think I’ll be “on your radar” anytime soon again. The album gets a rating of 4.5/5

(Purchase this album now on iTunes)

Send your requests to Kai: embraceme10@yahoo.com with ‘album review request‘ in the subject line.

What do you think of “On Your Radar?”

2 thoughts on “[Review] The Saturdays’ “On Your Radar””