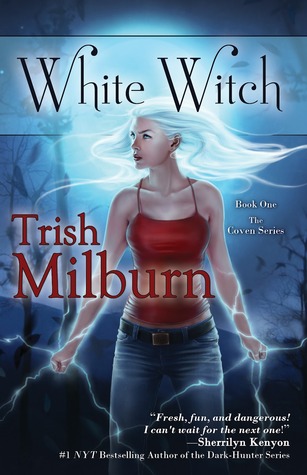 Witchcraft Is Her Family's Business.No One Quits The Family And Lives To Tell About It."Jax" Pherson has power, enough power to know her future will end in service to the dark coven her father controls. Unless she can stay hidden in a small community in the mountains of North Carolina. She must find a way to live without magic and deny the darkness she feels welling up inside her-the same dark power that fuels the covens around the world.All she wants is a normal life. A boyfriend. Friends. Some place to belong, but all too soon Jax's barely begun new life hangs in the balance when she discovers that the boy she's attracted to is sworn to kill her kind. He's a hunter with good reason to kill everything that goes bump in the night.Even the most fleeting use of her power is tantamount to signing her death warrant and will bring both hunter and coven down on her. But can she walk away when her friends are threatened by an old evil? Something created by the magic of witches? Jax's only hope of survival is to convince the boy she loves to forget everything he's ever been taught and help her find a way to fight the covens. To believe there is some good in her.

A heated forbidden love, runaway witches, unsettled spirits, vengeful covens, high school drama, and the occasional mean girls, White Witch has all that and then some.

The biggest highlight of Milburn’s new book is how fast paced it’s written. Right off the bat the story line jumped on its feet. Trish didn’t drown her readers in limitless description or lingered on past incidents leading up to the present, rather immediately she introduces the point at hand: Jax has arrived in Baker Gap and is ready to start a life of ‘normalcy.’

What’s not to love? There’s magic, romance, friendship, an evil coven on their backs, like I said, what’s not to love. And Jax isn’t your average irritable lead character who’s clueless as to what she wants to do with herself. Instead, we’re given a smart, beautiful, funny, rebellious young woman fighting for some form of existence among the regular people, as appose to joining the forces of darkness.

The fact that this young girl is only now beginning to experience what it’s like to be a normal teenager, going to high school, making new friends, falling in love for the first time and doing the usual teenage stuff is well played out in the book. Whether or not you’re the same age as Jax you can still relate in reflecting on how you were back then. The author builds on the idea of experiencing new things and finding a new life in such a way through her words that you’re almost injected in the story, as if you’re going through every single moment with Jax and that is truly hard to establish in a novel.

I usually don’t like how some books have girl sees boy and falls instantly in love with him kind of story line but I feel that it works here due to the pace already being carried out from start. I get that the author wasn’t about to wait for these two main characters to further develop their feelings by pondering around for a few months because she had already given us so much in the first couple sentences of chapter one. Whenever Jax and Kellar were together there was so much fire; their love is definitely unimaginable but not far from possible because such intensity can truly exist between two people.

The other thing I got giggly over is how it seems like a movie and each scene was playing out in front of my eyes. You can even fit faces perfectly well to the personalities of these characters. I can see a young woman of true strength and determination in Jax, a hot guy, Kellar, trying to be the ‘good’ son that won’t disappoint his father, and the punk rock friend, Toni, fighting for the freedom to express herself and not be the person her mother constantly presses her to be. And of course, the jovial pretty boy Egan, sharing similar fate (and abilities) with the protagonist, but refuses to let their troubles alter his playful lifestyle.

I must admit that the cover art was indeed what drew me into reading the book to begin with, because sometimes I really do get into one based on how appealing the cover is, and I wasn’t sure how I’d react to the story due to the undeniable fact that there are so many witches, vampires, faeries, and werewolves novels out now, but what a pleasant surprise ‘White Witch’ was. This book blew my mind completely. I’m bedazzled at how fast I got into it, reading for four (4) hours without even putting it down. The story just gave me such a rush and I love how recent it is. I mean, don’t get me wrong, I like stories set in medieval times as well but this one was so, so recent and unbelievably intriguing.

In conclusion: I loved it! I totally recommend this book and I promise you that’s no bullcrap. This is a great start in what’s measuring up to be a thrill ride of a series, and I’ll be re-reading the first until the next is released because I just can’t get over how enticing the story is.

Send your requests to Kai (embraceme10@yahoo.com) if you’d me to do a review on a book.

What do you think about ‘White Witch‘, movie worthy?