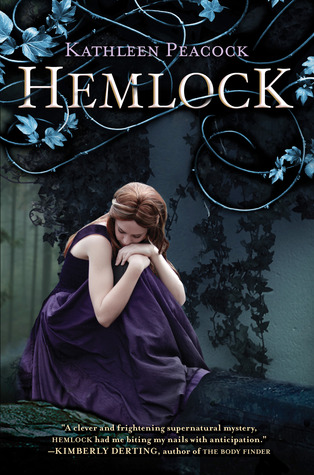 Hemlock could be the perfect town, aside from the fact that its swarmed with werewolves. Many of its residents suffer from Lupine Syndrome-also known as the werewolf virus-and are either thrust away to rehabilitation camps, or hiding the fact that they're infected. No biggie, except the infected living in secret could also suffer from the uncontrollable urge to kill.

Mackenzie and Amy were inseparable until Amy was brutally killed by a werewolf.  Now, Mac is determined to find her best friend's killer and put an end to her horrifying dreams, but what she doesn't know is that the killer is closer to her than she thinks.

Kathleen Peacock delivers a suspenseful, mysterious, and romantic urban fantasy that will leave you blindsided.

Like most, I was deeply attracted to the alluring cover art of 'Hemlock.' The synopsis didn't seem so bad either and I went into this book with high expectations. When I say high, I mean I was expecting bloody hunts, unstoppable action, and heated romances. What I got was

a slow paced mystery and a lot of weak drama. I’m not declaring Kathleen’s book a total disaster because it’s far from that, its just that I wasn’t as thrilled with the story as I was ‘expecting’ to be. So now I’m definitely suffering from a case of  tolerable disappointment.

The story opens up with the town dealing with another werewolf related death, and the loss of a young girl who’s related to a prominent figure in Hemlock. She’s the best friend of Mackenzie and Kyle, but supposedly girlfriend of Jason. Since Amy’s death, Mac has been having nightmares about her, which became more like puzzle pieces as the story went on. The dead girl would give hints toward her demise, as well as about the people Mac so adored. While everything starts to unravel, which happened kind of slowly, Mac doesn’t know who to trust as everyone around her seems to be carrying secrets.

The trackers are a group of werewolf hunters that play off the heroic BS in public, but are tainted by deceitful, malicious, and ruthless acts underneath it all. They are pretty much welcomed in Hemlock as saviors that will relinquish the town of werewolves, but their methods in doing so are just inhumane. Aside from all that, their leader, Branson Derby, has a creepy interest in Jason, and Mac is just not having  it.

As I read, I started to get thrown about trying to figure out who the killer white wolf was and often times accusing the wrong people just as Mac did. I commend Kathleen for writing in this way, allowing readers to get lost along with the protagonist, and then founded the moment she was.

Another thing that spiked my interest level was the unsettling relationship between Mac and Kyle, and Jason, the once boyfriend of her dead best friend. This love triangle steals the spotlight from the bigger picture at hand, finding the killer wolf and solving Amy’s murder. However, I didn’t mind getting pulled into it. From the beginning I rooted for Kyle; I just fell in love with his character and how intense he seemed. I think its great that he and Mac had strong feelings for each other, but of course, Jason had to be the challenger for that blossoming romance. Thus, the predicament Mac ended up in. It certainly didn’t help learning that your dead best friend’s boyfriend had a sudden interest in you, nor learning that YOU are the cause for their breakup moments before her tragic death. Nope! Mac definitely had a rough time handling that discovery, which is highly understandable. You could see how flustered she got at times, and in those moments, I deeply felt for her.

Anyways, It wasn’t a bad read. There was a lot happening and at times I even forgot about Amy, which is exactly what I wanted Mac to do on several occasions. I know that’s bad cause its her best friend and she’s dead, but as new discoveries are made, I didn’t really like the kind of person Amy was turning out to be. And although the mystery was entertaining, there were moments where I was kind of bored and just wanted the scene to speed up. Nevertheless, the story wasn’t as bad and I did like the ending. Oddly enough, I think I will get the next in the trilogy just to see if the excitement will intensify.