Demi Lovato has overcome quite a lot since the release of her previous album. And she stays on that positive path with her fourth, simply titled ‘Demi‘. My initial thoughts of this new release is that it must be a true representation of where the singer is at this point in her life, whether in music or personally. Since Unbroken established intrigue on my part, I’m eager to find out if ‘Demi‘ will have that same impact or greater. Let’s break it down now:

I like Heart Attack, especially the lyrics, but I’m not in love with the track. Its most definitely suited for mainstream but not exactly epic. Just for the here and now. But I should add that I like how achy she seems in the music video as she lives up to the words of the song. I can’t really find anything else to say about the lead single other than it’s alright.

Now, Made in the USA is what I’m talking about. I love the sweet lyrics and mellow beat. It’s hard to go through a Demi Lovato album and not appreciate her passionate singing. And by the way, she can actually sing. The track flows well with a breezy tone; that hook will definitely stay on my mind for days to come, not because its a common term but I like the concept in which its used. This is my favorite so far without hearing the rest but I can safely hold on to it. Without the Love, on the other hand, I’ll have to safely let go. Its sad rudiments leaves a bitter taste in my mouth and I want to pull Demi out of the stereo just to give her a hug. It’s a really nice song but so so sad because it stresses on the pain of love loss. Her tones emphasize nothing but hurt and it carries through to the end. The track lives up to its title unquestionably well.

Neon Lights sets off in a really uptempo vibe. Trendy, hypnotic, sexy, catchy, airwaves ready. This is bound to be a favorite for party lovers and such. Neon Lights comes in at the right time, taking the album from love overdose, aches and pain, and back into the intense feelings of love once more. The musical effects are almost like ecstasy in the veins; that break down at the bridge was sensually done. Demi’s sounding sexier than ever and this song depicts how good she is at bringing forth any emotion to spring harmonies to life. Unfortunately, Two Pieces just didn’t and couldn’t give me the same experience. The music production for the verses threw me off; had it been steady and in the same tone as the chorus I would’ve loved the song. But my love for the chorus couldn’t justify nor accept the way in which the rest of the track was arranged. But great singing though. 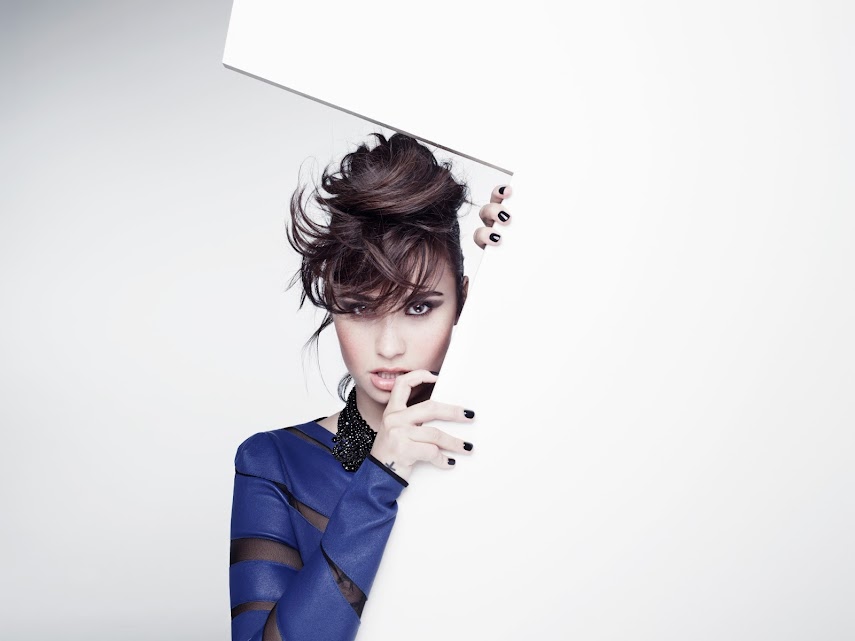 Once those keys started in Nightingale I was inclined to listen. Beautiful track. Intriguing words. Magnificent vocals. I’m simply slapping myself silly with excitement at how tasteful this track is. The slowest on the record so far, Nightingale is evidently a ballad, and an exceptional one I might add. This stole the place in my heart where Made in the USA once held. And if there happens to be another ballad after this one, and it embodies the glorious elements of Nightingale, I will undoubtedly fall in love with it. Biggest highlight of this song are those dramatic harmonies toward the end. Its like Heaven opened up. Seriously.

Somebody shake me. In Case is just as earthshaking as the previous, but I wouldn’t say its a masterpiece. Though, the words are thought-provoking, the piano compliments Demi’s emotional voice, and I’m blown away by its effortless arrangement that dismisses the inclusion of a band. So, I guess I would call it perfection after all. It’s hard to find words that describe the greatness of such songs so I leave it as is. Impressive.

Really Don’t Care ruined the mood for me. I like that the singer transitioned into a more upbeat mood once again, but this track, as bouncy, loud, fun, and carefree as it is won’t remain in my memory after today. No matter if it featured Cher Lloyd, who I happened to not be a fan of really. So, to conclude, I ‘really don’t care’ for this one. However, I love the fierceness in Fire Starter. Demi is a “badass” and I like it. The dance themes I don’t mind either. There’s something about this track that demands your attention and you better give it. The song is just empowering; a faster version of Skyscraper. An anthem for prevailing above the odds.

I’m somewhat over the dance mood by the time it gets to Something That We’re Not. I feel like this one is a continuation of Really Don’t Care. As much as I like this track more than the latter, I still can’t get into it. I barely made it to the end of the song without cringing for some reason. I almost thought the album was going down hill with all the dance tracks but Never Been Hurt is actually tolerable. I enjoyed the slowed down segments after the hook and overall concept of starting over in love, but I have a sense of  anticipation for what will happen next. Hopefully not a dance track.

Thankfully, Shouldn’t Come Back saved the remaining minutes of the album. This one’s lovely with its lonely violins and achy acoustic guitar melodies. I was nearly brought to tears by the unbearable pain in her singing. And at the bridge once the music dissipated it almost sounded like she herself was in tears. I love this song for its murderous lyrics. And Warrior is no different. Demi is great at showcasing her versatility as an artist in switching from ballads to dance but I love when she gets real and stripped, backed up only by the haunting sounds of a piano. Continuing the uplifting spirit that took flight in the powerful Skyscraper, Demi never fails to show how much she’s changed and is stronger than ever. Nothing can hurt her again. A wonderful conclusion to an interesting album.

Overall, I enjoyed the self-titled record. Not sure if there was much maturity demonstrated in the music, but her singing as I’ve mentioned before was sounding as flawless as ever. I would love to hear more timeless songs like those ballads in her future releases, but for now I’m satisfied with ‘Demi’ playing it safe.

*This review is based on the opinion of the writer and not of EY as a whole.

What do you think of Demi’s latest album?