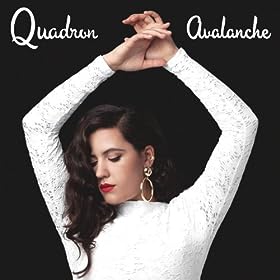 First of all, I am so thrilled to have discovered this album on Amazon. Quadron is honestly new to me and I had no expectations, no idea whatsoever about the kind of music they make, but let me tell you I've gone bat shit crazy listening to this album. Avalanche sounds like a blast out of the 70s. It embodies the feel good type of music even your grandparents can enjoy. I mean songs that actually make you sit and listen to the words, or get up and dance but still listen to the words and soak it all in. It's just great. And the only issue I have is with myself, for only now finding the Danish duo.

Well, as I sit here in front of my computer and pick my brain for some intelligent way to write a track by track review, all I’m coming up with is splendid. Every single track is splendid. From start to finish I’m consumed, intrigued, and entertained. Great work to Coco O for having such a mesmerizing and persuasive voice, and kudos to Robin on such brilliant music production.

The minute LFT kicks in I’m hooked. I really like the neo soul beats, and those lovely harmonies compliment the instruments well. The song is a bit uptempo, which I love as an opener. Not to mention the ending was just perfect. What more can I say, LFT is impressive. And can it get any better from here? Of course. Favorite Star is just as addicting. I enjoyed the mysterious vibe the song gives off in the verse, unveiling a sense of boldness and seduction in the chorus. Highlight of the track is that break down going into an intense closing once more. It seems all these tracks are composed with a theatrical ending. No problem there.

Hey Love is very much deserving of being a single, whether acoustic or with the backing band. The track’s sizzling hot! Like, I’m obsessed with listening to it over and over now. It’s actually one of the more modern sounding songs on the album but there’s still that old school sound as well as the element of authenticity that is incomparable to the washed up and rather played out laundry on the radio today. Anyways, all I’m saying is wow, beyond exceptional. From lyrics to beat, Hey love is off the chain. By the way, have you seen the music video? Talk about entertaining.

As much as I love and adore the previous tracks, Crush is my favorite. The lyrics in all these songs are like poetry and I enjoy decoding the message beneath every word. They’re all very relatable and memorable, getting my utmost respect for maintaining that aspect. Crush has charming piano melodies, an hypnotic base, and of course Coco’s beautiful and passionate ranges. This is the slowest song so far, and one that has caught my heart the most.

When those haunting strings started playing in Befriend, I felt electrified. They sounded dark, inviting, and otherworldly, and once the lighter beats kicked in and a clear and enigmatic Coco starts to sing, I was undoubtedly soaring in the clouds. The song doesn’t have a heavy backing band and it doesn’t need that much to make it fantastic because with so few instruments it’s wonderful. Yes, Befriend is subtle, yet intriguing all at once. I implore you to listen to the words.

The tempo is picked up in Neverland. I think this is one of the more conscious tracks, telling the story of someone deeply affected by stardom (if you want to look at it like that) and almost losing himself. Hmm, has me thinking of a certain man in particular, especially with that suggestive title. Well, aside from that which I think is a great concept, this song is awesome, very though-provoking.

I had to warm up to It’s Gonna Get You as I listened to it. Unlike the previous tracks that had me sold from the moment the beat came, this song really had to grow on me. However, it seems as if the concept is continuing over from the previous. And if I’m correct, this one is actually about finding a way out of what happened in Neverland after realizing you actually need saving. Interesting songs, takes good songwriters to actually write good songs that make people think. This one might not stick with me, but I do like its presence on the album.

Okay first off, not really a Kendrick Lamar fan, but his participation in Better Off is acceptable on my part. Would it have been great even without his part, yes it would have. Because the vocalist is so talented, her soulful persona pulls you in on ever song and all you want to do is suck up every single note. Does that even make sense? It does to me, that’s the important thing 🙂 Back to Better Off. The song is sexy, ecstasy like. I’m enchanted listening to it. Though, its about breaking up and doing it on your own, I like the sultriness of the harmonies and how tantalizing everything comes out. Such a honey like song, and I love how the slow mellow groove fades out to the end.

Sea Salt is another slow track with milky smooth tones. The singing is just as sexy as the previous and just as bittersweet, focusing on heartbreak and being unable to let go. I love the realistic elements and how emotional she sounds. Once again, great production and impressive lyrics. Its truly difficult to find the right words to describe the perfection of this track.

The album closes with the title track, Avalanche, and its my second favorite of all. The words are beautiful, the music is magnificent, and the singing is exquisite. A very pleasant way to conclude an album I’d say. What gets me about this song is Coco’s way of drawing her listener’s attention, not relying on excessive ranges or over the top adlibs, she’s clean, to the point, and doing it as simple yet superbly. I’m sold completely on this track, and very satisfied with this album.

According to my research, this is Quadron’s second release and I think they’ve overcome that sophomore album curse where your debut was much better and the second sounds crappy. Avalanche sounds mature, very original, with nicely done music arrangement, a singer who has the skill and doesn’t need studio corrections. It was just really well done, and I can’t say I didn’t enjoy it all the way through. With the exception of that one track that I had to take my time to get into, Avalanche is a solid release and fully deserving of all the music rewards this industry has to offer.