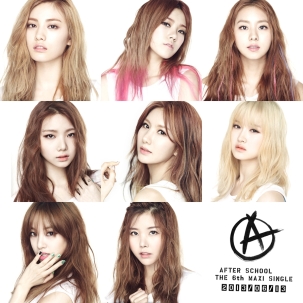 I had to say that because I’ve been waiting, and I am somewhat satisfied. Not entirely in love with the mini album but I’m sold by the overall concept. I listened to the EP at least two times before writing the review so I can safely explain my impression of each track. From start to the finish, every single song had something of interest. With the exception of the intro, 8 Hot Girls, which I think should’ve been longer instead of only a minute and couple seconds, my reaction has pretty much swayed from sensual, classy, fun and upbeat, to warm and misty. I’ll break it down so you know which song rubs me in what way. But before that, let’s get into 8 Hot Girls.

I never like it when producers would talk on tracks and announce themselves or even the artist. I feel like its unnecessary and it takes up minutes that could’ve been given to the artist when the intro is already that short. Aside from that, not really feeling the sound of the vocals. At one point I thought it was JungAh singing the hook but I’m not so sure cause she usually sounds much better than that. And the voice just kind of gave me the idea like the person is trying too hard to sound sexy and instead it came out like she was getting off. That’s just me.

Moving on, I am a fan of First Love. I love the old school, groovy, sexy, r&b aspect of the song. I think this the first time After School released a down tempo as their lead single and I think that was a great idea.  Besides showcasing how good their harmonies sound in such a laid back setting, I liked the fact that everyone has more than one lines, especially E-Young and Kaeun. On to the music video, super cool. I find it subtle yet sexy in its own creative way. The girls certainly did well mastering the art of Pole dancing. Yes, it is a art and not only for stripping. However, in the case of First Love’s music video and choreography the pole dancing concept is used in a artistically sexy manner, without looking trashy. In terms of direction, the switching between cages and an empty room where the ladies looked vulnerable was interesting. I enjoyed the athletic capabilities portrayed, as well as the sporty, sweet and bad girl outfits. See for yourselves. You’ll want to keep going back to it.

As much as I love the lead single, Dressing Room is my absolute favorite. I love the 80’s rock vibe going on. The hook is catchy, fiery, powerful. I’m sensing a promotional single coming up. Its definitely more upbeat and energetic than First Love, even compliments their bad girl look on the alternative album cover. It would’ve been nice to see this song turn into a music video with E-Young rocking out on the guitar. With that fantasy aside, the breakdown is on fire; I felt the intensity of the instruments as their voices disappeared, but once they kicked back in I was excited, and Raina’s solo, “I’ll change it up…” or whatever it is she’s singing, that part keeps playing over and over in my head. What I’m trying to say is the track is upbeat, sensual, rockified, beyond addicting, and It’ll be on repeat for a long time to come.

Time’s Up reminded me of the Shampoo concept and I’m not a fan of either tracks. I’m just not into the dance, poppy poppy, bubblegum, cutey songs. I feel like their pitches are too high and just annoying. That rap, no idea who’s even attempting to spit, but that segment didn’t do anything for me. Time’s Up didn’t appeal to me at all, and I barely made it to the end of the song. It’s acceptable to fans who enjoy such concept, but I can’t seem to warm up to it.

Love Beat isn’t so bad, though. I see how this track can run the clubs. I like how breathy their voices are, and the hook is definitely catchy. What I also like is that I’m not irritated by any vocal effects, because there aren’t a lot used on the EP. That’s always good, in my opinion. I enjoy hearing their clear and natural voices, and the little effects used are tolerable. A bouncy and catchy song that’s not exactly solid and memorable, but surely mainstream ready.

The sixth and final song on the EP, Make-up & Tears, is a lovely, bittersweet duet performed by JungAh and Raina. The two main vocalists, and in my opinion the strongest singers in After School, always do an excellent job at reaching my heart with their ballads. Not trying to compare, but Make-up & Tears soars as beautifully as Timeless. The song is superbly arranged, in regards to vocals. Both compliment each other’s ranges pretty well, and there’s no one overpowering the other. That bridge was just heart-wrenching and breathtaking. I can’t express enough how soothing their vocals are when it comes to slow tempo tracks. JungAh and Raina continually gives me something to look forward to on every After School record, which is a sad ballad with emotional singing and sensual music.

Overall, the EP has its selling points with tiny bumps down the road. The lead single signifies aspects After School is known for, which is creativity, sensuality, and class. The one thing though, I felt the EP sounded somewhat reserved. Regardless, its an entertaining release and their efforts should be recognized. After all, this is a group that works extremely hard to hold their ground in the ever changing world of kpop, and hopefully, one day After School will be acknowledged on a global scale.

This review is based on the opinion of the writer and does not reflect the views of EY as a whole.

What do you think of After School’s latest?