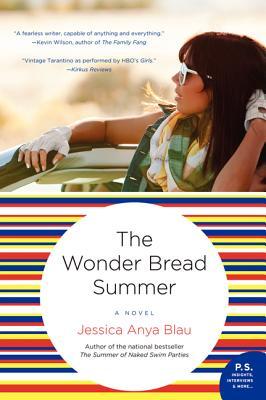 *A paperback copy was provided by publisher in exchange of an honest review.

It’s 1983 in Berkeley, California. Twenty-year-old Allie Dodgson is a straitlaced college student working part-time at a dress shop to make ends meet. But when the shop turns out to be a front for a dangerous drug-dealing business, Allie finds herself on the lam, speeding toward Los Angeles in her best friend’s Prelude with a Wonder Bread bag full of cocaine riding shotgun and a hit man named Vice Versa on her tail. You can’t find a more thrilling summer read!

Once again, I did not read the synopsis instead I went into the book completely unaware of the plot.

The Wonder Bread Summer, wow, I actually liked the titled and was really looking forward to reading an interesting contemporary story. Sadly, I was neither amused or in love with the book. It was just an okay read, and the only reason I finished it is because I’m trying to stay clear of DNFs.

The story opened up and I was like, oh nice, it takes place in the 80s and its new adult so this should be good. What I didn’t know was that from beginning to end I would develop no connection with the main character or any other characters whatsoever. Honestly, the only person I liked was the grandmother (who happens to be dead) but seems to me she had some decent things to say about life, which Allie never really acted on. As she went on her little journey, there were things that made no sense, and activities that made her seem cheap.

The depiction of drugs and racial stereotyping didn’t really bother me as much because the author kept it real. What I didn’t like was how Allie kept doing one stupid thing after the other. Like she would go somewhere and seek out someone who just seemed so pointless to the situation. In particular, her mother. I don’t want to spoil it but really, how can you bring drugs around an already drug addict and be as naive enough to actually think she would be of some kind of help to you when she already made the ridiculous decision of abandoning her child to become a tambourine girl in some played out rock band. Allie, that’s just dumb. And she continued to piss me off throughout the book with idiotic things she would say and do. I wanted to slap her majority of the time. The minor characters weren’t as bad as she was, but they didn’t seem to shine throughout the pages either. And up to the end of the book I was filled with so much rage, I just wanted to kick some of them.

As for the writing, it was good. The descriptions were good. Jessica painted a very clear picture, its just that the overall concept didn’t impress me. And I feel really bad whenever I give a book under 3 stars but I have to be honest. The Wonder Bread Summer isn’t for me. And even though I had no expectations really, I wasn’t expecting to feel this disappointed.

*This review is based on the opinion of the writer and doesn’t represent EY as a whole.

One thought on “Book Review: The Wonder Bread Summer by Jessica Anya Blau”