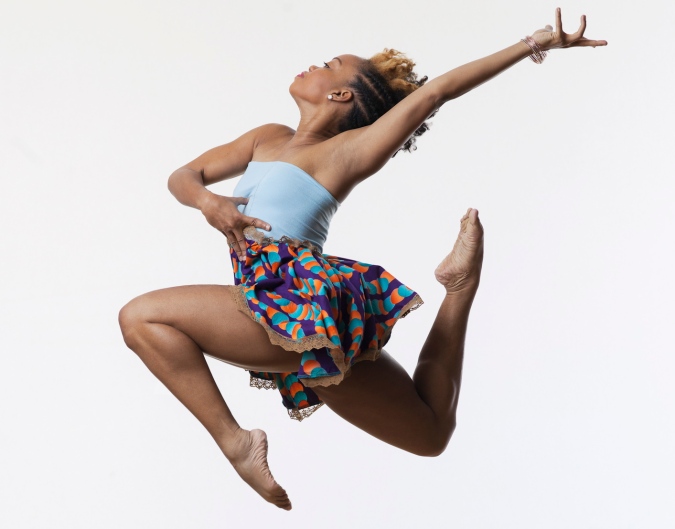 It is truly a pleasure to have Camille A. Brown on our site. You cannot deny the talent of this amazing woman along with her dance company; from their emotional and heartfelt theater productions that tell stories through rhythmic movements, to their contribution to the art community and thereof. I’m beyond thrilled to have come across Ms. Brown and extremely delighted to share her with EY readers. Check out a wonderful snippet of the Camille A. Brown & Dancers in action, and continue to our exclusive interview below:

Tell us a little about your journey in becoming a dancer. Where are you from and when did you realize this was what you wanted?

I’m originally from Queens (Jamaica), New York- Queens- all day, everyday! My mom was (and still is) a lover of dance- particularly musicals. When I was little, we would go to the neighborhood library and check out musicals every weekend. My favorite was The Unsinkable Molly Brown. I also loved watching Michael Jackson and Janet Jackson videos. I would rehearsal those routines like I was a part of their tour LOL

Who are some of your biggest influences?

My grandmother is one of my biggest influences. She passed away in 2006. I would always tell her that every performance I did was for her. She was fearless, funny, and spiritually grounded.

I’ve read that you are also a clarinetist. Has this musical ability impacted your dancing in any way?

Yes! I used to play the clarinet when I was younger! Knowing that aspect of music has definitely influenced how I implement it into my work. When I was in the Queens honor band, I could hear every part-strings, percussion, horns-and understood that they all had a special and specific place. The movement has a specific place in the world of music, and that place can be anything the creator decides. I listen to music psychotically. I believe you don’t dance to the music, you are the music. In order to become the music, you must know it so well it’s as if you composed it yourself.

How challenging is it, as a choreographer, to not only create and drown yourself in movements, but to also teach your techniques to others and enable them to capture the intended emotions you hope for?

I expect my dancers to drown themselves in the movements and characters as deeply as I do, and I am thankful to have dancers who do so! For this reason, I refer to my dancers as actors. If the intent isn’t there, the movement is pointless. When you have dancers and collaborators who are just as dedicated to the work as you are, the process becomes all things- wondrous, challenging, growth- producing, and special. We all make the decision to go all the way or not at all and to be open to whatever comes out of the process. When everyone is committed, the intended emotion will be captured and constantly investigated.

You’ve said that you are interested in that space between dance and theater. Can you tell us more about this space?

Yes! I LOVE theater and have always been inspired by in. I’m excited about having opportunities now in both the dance and theater worlds and want each to inform the other. That’s what I mean by the space between dance and theater- where they meet and how (for me) one can’t live without the other.

What does the world of theater mean to you, and what do you want more than ever to convey to your audience?

Hard question! I was a shy child and used to get teased a lot. Because of this, I wasn’t always comfortable being myself around people. Something about being on stage and playing characters made the fear go away. There’s nothing like performing. I feel as if I can do and be anything. My artistry is stretched to the limit. It’s a scary place- putting yourself on stage for people to judge and criticize you, but I always have to remember why I am doing it. Who am I doing this for? How much joy does it bring me? Will I let criticism silence me as it did when I was a child?

More than ever, I want to convey my story (my truth) to the audience. I want to inspire dialogue, challenge audiences, make them laugh, make them uncomfortable. Overall, I want to give a full range of emotions and experiences.

According to your website, one of the biggest highlights of your career was being named choreographer for the Broadway revival of A Streetcar Named Desire in 2012, along with the Off-Broadway musical production, The Fortress of Solitude. What makes these two productions standout more so than your previous works?

I always wanted to choreograph for theater, but didn’t know how to get myself through the door. Where was the door! LOL I started speaking my dreams into existence. When I would tell people about my choreography, I would include the desire to choreograph plays and musicals. One day, I got an email from Daniel Aukin- the director of Fortress of Solitude. I knew other choreographers were up for the position, and since I had no theater experience, I assumed I wouldn’t be chosen. I pushed through my doubts and met with him! Regardless of how I was feeling, I gave it my best shot. A couple weeks later, I met with Daniel, Michael Friedman (composer), and Itamar Moses (book writer). I still thought I didn’t have a chance, but God knew differently, and I was offered the position! I’ve been on the team for 4 yrs and am thrilled the musical continues to move forward. I’m giving it my all. They could’ve chosen someone who had far more experience than I did, but they gave me a chance, and I never take that for granted.

How have you evolved since your first performance till now?

I hope so! Sad day if I haven’t lol 🙂 I try to push my artistry to the point of exhaustion and hope my evolution is clear and present in my work.

Tell us about your upcoming production, Black Girl, and a little of what audiences can expect.

Using Melissa Harris-Perry’s, Sister Citizen, the spellbinding photography of Carrie Mae Weems’, the fantastical imagery depicted in Lewis Carroll’s, Alice and Wonderland, and Daniel Silberberg’s Wonderland: The Zen of Alice, as jumping off points, Camille A. Brown will create a multimedia work called, Black Girl, that depicts the complexities of carving out a positive identity as a Black female in urban American culture. In a world where Black women are often only portrayed in terms of their strength and resiliency, this work seeks to interrogate these notions, creating a work that represents the full spectrum of the black female and how we negotiate ourselves in this racially and politically charged world.
What are our rabbit holes? Is it possible for black girls to be free in what Perry describes as the “crooked room?” The creation of this work is heavily based is community participatory research which includes movement workshops and interviews with Black female focused groups of all ages and incarcerated women’s facilities
across the country. By visiting the latter, Camille seeks to expose the blurred lines of physical incarceration vs. mental incarceration of Black women. It is her hope that this work resonates, inspires, and encourages Black Girls everywhere.

I’m at the very beginning stages of the creative process, so it’s too soon to say what audiences should expect other than seeing the full spectrum of the Black female…female…human.
I just came back from Cleveland where I met with Black women who were artists, mothers, and imprisoned. They are all survivors.

Thank you for taking the time. Please leave a message to aspiring dancers.

To dancers, keep moving forward, and be brave about it! If I listened to the negative things people said, “you don’t have the ideal body” “you can’t dance and choreograph” I would probably not be in the dance world anymore. Don’t let anyone tell you who you are and who you are not.

To choreographers, write your story and document it so it can be told your way. Keep asking questions- keep challenging yourself. Don’t let judgment dictate your place in the dance world- favorable or not! Define “success” for yourself

To Black female choreographers, when I was growing up, I was conditioned to just be a dancer. I wasn’t told (just by the sheer fact that I was around far more male choreographers than female), that being a director and choreographer was an option for me. IT IS!!!

YOU CAN DO THIS!

To everyone, it’s never just about you. When you get that oak door open, hold it so others can get in too!

Find out more by checking out the following links:

One thought on “[Exclusive] Camille A. Brown on drowning in the art of dance”